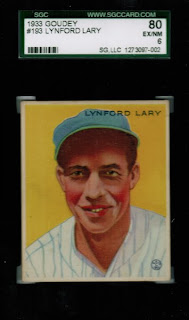 This card was also in the batch of PSA crossovers that I recently received back from SGC. The card was originally a PSA 6 and crossed over at the same grade to SGC 80. It's a nice example, with great centering and good corners. On the design side, it's not one of the better efforts in the set, with a yellow background that is a little blah for a guy with such a great name.
Lynford Lary, nicknamed "Broadway," played parts of 12 seasons as a shortstop with the New York Yankees, Boston Red Sox, Washington Senators, St. Louis Browns (twice), Cleveland Indians, Brooklyn Dodgers, and St. Louis Cardinals. He is featured on this card as a member of the Yankees. As a hitter, he didn't have much pop (.372 career SLG), but he had a keen eye, posting a very solid career .369 OBP, thanks to 705 career walks against 470 strikeouts.
His best season came as a 25-year old in 1931, when he posted a .280/.376/.416 line (113 OPS+) with 10 home runs and 107 RBI as the Yankees' starting shortstop. Apparently, the Yankees weren't impressed and Lary lost his job the next season to 21-year old Frankie Crosetti, who would hold down the shortstop position full-time for the Yankees through the 1940 season. Oddly, it appears that Lary was the superior offensive player (91 career OPS+ to Crosetti's 84). Crosetti never had an offensive season as productive as Lary's 1931 campaign. Lary led the American League in stolen bases in 1936 with 37, during his first stint with the St. Louis Browns.
Lary was married to Mary Lawlor, an actor who starred on Broadway and in two feature films.
Posted by Keith at 4:07 PM

Keith
I spent a good part of my childhood in the late 1980s collecting baseball cards. After nearly 20 years away from the hobby, I am now attempting to assemble a complete set of 1933 Goudey baseball cards. This blog chronicles my efforts and progress.